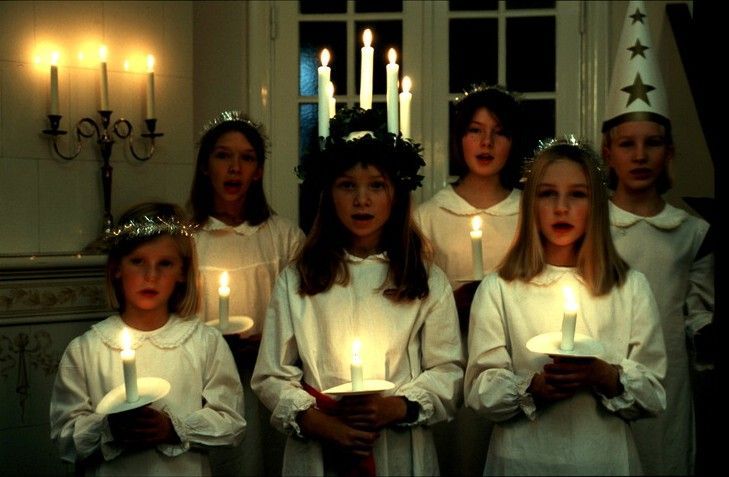 I grew up knowing I was Swedish. As fourth-generation Americans, my sister and I took pride in being the only cousins on either side of the family to have received Swedish blood and heritage from both parents. In multi-ethnic cultures, bloodlines and heritage tend to mix with the passing of time. My parents, by finding each other, had preserved intact for one more generation the Swedish customs they knew.

For the language, it was already too late. My mother remembered words and phrases, but grew up speaking only English. My father spoke Swedish as a child, but forgot it over the years. As a result, this facet of my heritage was gone by my generation. The realization of this loss made me more determined to preserve what I could of what was left. Nothing embodied that heritage more than the food and festivities of the Christmas season.

The season started with Santa Lucia Day. Lucia was a young woman of Sicily martyred during the reign of Diocletian around 300 A.D. It remains uncertain how the legends that grew around her traveled from Italy to Sweden. They may have come with the missionaries who brought Christianity to Scandinavia shortly after the first millennium. Or, Swedish sailors may have witnessed Lucia festivals on their travels and brought the custom back to their home country. At any rate, Lucia came to be Swedens favorite saint. Her festival fell on December 13under the calendar in use at the time, the shortest and darkest day of the year. Therefore, Lucia came to be seen as the bringer of light.

As per old Swedish custom, the eldest daughter in each home rose before dawn on Santa Lucia Day and put on a white robe, a red sash, and a crown of lit candles. She went through the household offering the inhabitants hot coffee and freshly baked rolls. In my home, we never dressed up as Santa Lucia, nor did we ever get up early to bake. However, my mother did follow the tradition of hiding a single almond in the oatmeal (a substitute for the porridge our ancestors ate back in Sweden). The daughter who got the almond was supposedly the next one to be married.

Saffron and raisins go into the traditional Lucia rolls we ate later in the day. In fact, in a cookbook of Swedish recipes showing Lucia rolls without saffron, my mother noted in pencil, I didn’t try these, as genuine Lucia rolls are made with saffron. The finished product offers a denser texture and yellow color different from the moist, white lightness of Swedish tea rings. To make saffron rolls for Santa Lucia Day you will need:

Add milk to margarine, sugar, and salt in large bowl. Stir until margarine/butter is melted. Let stand until lukewarm.

Make into traditional shapes. [The most common is an S with the ends curled into the center to form spirals.] Cover and let rise until double, about 45 minutes. Brush gently with mixture of beaten egg and water. Bake at 375°F in preheated oven for 12-15 minutes or until golden brown.

From Santa Lucia day on, the smell of baking cookies, melting chocolate, and rising dough filled the air more frequently as my mother geared up her preparations. She made fancy gelatin salads whose various layers contained whipped cream, nuts, cheese, and multiple other ingredients besides colorful fruits. They gelled in individual star molds, or a large wreath wring, or a Christmas tree shape. She set the molds, one for Christmas Eve and one for Christmas Day, on the floor of the back entryway. The Minnesota cold seeping through the stone tile converted this little three-by-five-foot room into an extra refrigerator during holiday time.

My mother made and froze rye bread and tea rings, cookies and candies. She prepared vegetables, relishes, and hors doeuvres as far in advance as practical. She made the time-consuming sandbakels, painstakingly pressing the buttery dough into each individual mold for baking.

She and my father spent an entire day making Swedish sausage, that being a two-person endeavor. Indeed, the first sentence on her handwritten recipe states, This is a big job.  As in many hand-me-down recipes, this one has few set quantities, only proportions. An example: Get ___ pounds of good, lean beef. Get twice as much lean pork and fat pork as you do beef, but order three times as much lean pork as fat pork. Cook one-fourth as many pounds of potatoes as you have of meat.

Making sausage involves enough work that rather than making a small batch, you might as well do it big time and freeze what is not immediately used. With that in mind and a partner in hand (you really can’t do this alone), head for your butcher shop You will need:

Have the butcher grind these nine pounds of meat together. Then head home and dig out a big mixing pan for the meat.

Cook potatoes in their jackets. Skin and mash well until there are no lumps. Add to the meat along with:

Add beef broth (1 beef bouillon cube per cup of water) a cup at a time. (My mother used to add some extra calcium via a cup of powdered milk, but this is optional.) Mix well with your hands until the mass is very soft and workable and has no lumps. If the mixture is not soft enough, it will prove difficult to stuff into the casings. Take a tablespoonful of the mixture, fry it, and taste. If it’s too bland even for Swedes, add a little more each of the white pepper, allspice, cloves, and ginger. Remix and fry another tablespoonful to taste If it’s to your liking, you have now reached that point getting the meat into the casings where you need your partner.

Your hog casings should be cleaned by running cold water through them. Leave them in water so they remain pliable. Have a scissors and plenty of cotton string to tie off links. (Strings of manmade materials may melt when you bake or fry the sausage.)  Whether you use a meat grinder or mixer with a stuffer attachment or a hand stuffer, the object is the same: to get as much meat as possible into the casings rather than on the table, floor, or back into the mixing pan. Push the casing all the way onto the end of the stuffer. One person forces the meat through the mechanical or hand stuffer while the other supports the expanding, meat filled casing and tells the grinder when to stop and tie it off. Eighteen inches is a good, average length. You will need to tie two strings, one to end the first link and one to start the next one. With a little practice, the two of you will work up to a rhythm in which the meat does not get pushed through so fast that it bursts the casings or so slowly that the casings are unevenly filled.

Prick stuffed links on both sides every few inches with a darning needle. If you forget this step as I once did, the sausages will burst their casings as heat inside expands during cooking, and you will end up serving oddly shaped bites instead of neatly formed links.

You can bake Swedish sausage in a covered pan (300˚F for half an hour), removing the cover halfway through to let the sausage brown. My mother preferred frying it on the stove. Once it’s cooked, you can cut the large links into any length you choose. This freezes well, so wrap it up and enjoy it once in a while throughout the year. Serve plain or with mustard.

On Christmas Eve, burning logs crackled in the fireplace. The tree, decorated by parents and children shortly after Santa Lucia Day, stood resplendent with lights, tinsel, and decorationsSwedish and American, old and modern, handed down and handmade. Wooden Dala horses, straw goats, and paper-cut Swedish elves watched the festivities from window sills. My sister or I read the Christmas story, after which each of us chose our favorite carols. The family sang together to my father’s accompaniment on the piano.

The linen-covered dining room table sparkled with the best glasses and the family silver. Serving plates and bowls offered Swedish sausage, Swedish meatballs in their gravy, potato casserole, various cooked and raw vegetables, homemade dill and sweet pickles, pickled herring, breads, and the fancy gelatin molds. We bypassed the lutfisk of my grandmothers generation. The traditional dessert of Swedish rice pudding with lingonberry sauce followed, accompanied by a tray covered with samples of the many candies and cookies made during the past days.

After a leisurely meal, we adjoined to the living room and took our presents from under the tree. The unwrapping and cleanup filled the time until we bundled up to trudge through the snow to eleven o’clock church. Although the thermometer often stood below freezing, I felt and remember only the warmth of food and family. That, and the special Swedishness of the season.

Susan J. Alexis was born and raised in Minnesota, the heart of Swede country.  Her subsequent seventeen years living in Mexico and ten trips to Latin America as interpreter with Volunteers in Medical Missions have given her not only a greater understanding of other cultures, but a greater appreciation of her own.  She has authored two books on short-term volunteer missions, Healing the World One By One and Caring Hands (both available from Amazon).  She lives in Albuquerque, where she studies Swedish in her free time.