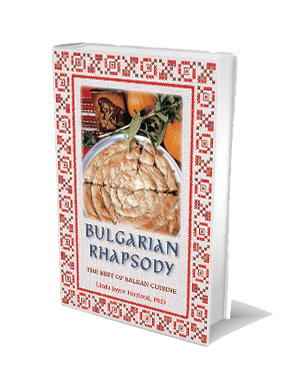 In 1990, I spent six weeks in Bulgaria just as the country was emerging from 45 years of communist rule. For most of the time, I rented a room in the home of a wonderful Bulgarian woman named Tatyana in the town of Rousse, a beautiful city on the Danube. Everyday Tatyana made the most marvelous meals for me and I started standing over her and writing some of the recipes down.

I quickly learned that the trademarks of Bulgarian cuisine, like those of its Mediterranean cousins, are slow cooking and use of fresh vegetables. Its wonderful pastries have been influenced by the nearby Austro-Hungarians. Also, having endured 500 years under the yoke of the Ottoman Empire, Bulgarian cooks inherited the best of Turkish influences.

When I returned to the United States, I started networking with the Bulgarian community in the Washington, D.C. area. One day I realized I had collected enough recipes to write a cookbook and the lack of Bulgarian cookbooks encouraged me to proceed. The end product was a labor of love called Bulgarian Rhapsody: The Best of Balkan Cuisine. Since one of the best windows into a culture is its cuisine, Bulgarian Rhapsody explores the culinary and cultural traditions of this wonderful country that lay hidden behind the Iron Curtain for almost fifty years.

Since I published Bulgarian Rhapsody, I haven’t stopped collecting recipes. Here’s the link to my recipe page. The extra Bulgarian recipes are under the Bulgarian heading.