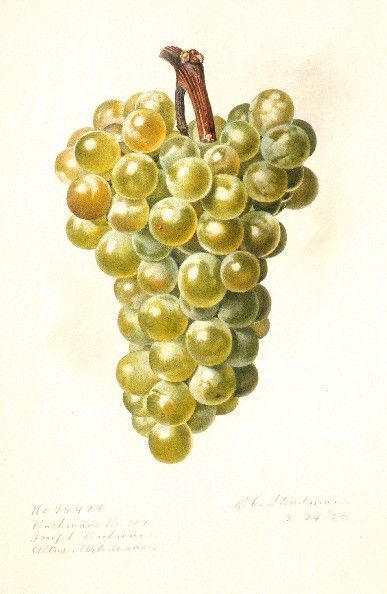 The half sweet, half tart juice of immature grapes is a refreshing and trendy alternative to vinegar or lemon juice.

In the tasting room of a vineyard on Long Island, the attendant poured samples of their various wines. As I made my way through the bottles, I noticed a light-colored bottle of wine at the end of the line. I thought it was a chardonnay or Chablis. It turned out to be not wine at all, but verjus, the non-fermented juice of grapes handpicked at half ripeness during the annual thinning of the vineyard which allows the remaining grapes to grow to full size. Thinning of the grapes, which are high in acid and low in sugar, is traditionally done at veraison—the time during late summer when grapes are just starting to gain some color.

The attendant poured a small glass of the chilled slightly green liquid. The refreshing half sweet, half acidic taste amazed me and was my first introduction to a new, but old ingredient.

For those who know about verjus (and now you can count yourselves among them), it is prized as a substitute for vinegar or lemon. Verjus works wonders in salad dressings as a vinegar substitute. With crisp acidity balanced by slight sweetness and pronounced fruity flavors, this versatile product can also be served chilled on its own or as a spritzer (i.e., adding some sparkling water) for a tangy, refreshing non-alcoholic alternative to wine.

The use of verjus in cooking dates back to the Romans. According to food historian Linda Stradley, verjus was a medieval condiment that was once a staple of French provincial cooking. In French, verjus means “green juice.” While its popularity dipped with the advent of vinegar, it is making a comeback in France as elsewhere. It is been an ingredient in some French mustards. In neighboring England, food historian Theodora FitzGibbon writes about “verjuice,” which is something akin to verjus but is the juice of crab apples, another sour fruit. It was a popular ingredient in English cooking, until it was replaced by a “squeeze of lemon juice.”

Over the years, I have found that vinegars can be a quite harsh due their acidity, be they industrially produced or by the traditional Orleans method (that’s Orleans, France) in which naturally-occurring bacteria turn wine sour.

Verjus is an up-and-coming ingredient worth rediscovery. There are only a few American vineyards that make and sell verjus—Wolffer on the East Coast (www.wolffer.com) and Navarro Vineyards (www.navarrowine.com) and Terra Sonoma on the West. Terra Sonoma’s verjus is organic and a bit sweeter.

I encourage you to experiment with verjus as I have been doing. It is not only an alternative to vinegar (red wine, white, rice, or even champagne) in vinaigrettes, but also great for deglazing pans, a secret ingredient in salad dressing, sauces and reduction sauces. For example, Terra Sonoma recommends simply reducing verjus until it is thick and creamy and then pouring it over fresh cut fruit, such as strawberries, cantaloupe, berries, for a delightful summer dessert. Be sure to try using verjus in your own recipes that call for vinegar or lemon. I know you will love the results as much as I have.

Since verjus is not alcoholic, its sale and shipping does not fall under the restrictive interstate laws that apply to its alcoholic brethren, so it can be shipped to anywhere in the United States.

Pork Loin with Verjus and Fennel
This recipe comes from Pat Daniels of Navarro Vineyards, in Philo, California. Serves 4.

Mix all ingredients except pork and 1/4 cup verjus in large glass bowl or baking dish. Pierce pork so that liquid can penetrate. Marinate at room temperature at least 2 hours or marinate a few hours in the fridge, then take out 2 hours before cooking so it reaches room temperature.

Remove pork to a carving plate and pour and scrape drippings into a pan. Add 1/4 cup Verjus and chicken stock and reduce for 20 minutes. Slice pork and serve with the sauce.

This recipe is one of my favorite salads updated with verjus. It is delicious. Serves 4-6.

Peel the cucumbers, cut in half and then along the natural lines into thirds. Cut into ½-inch sized cubes; add to serving bowl. Dice onion and add to cucumbers; set aside. Slice tomatoes into ½-inch slices and those into ½-inch cubes; add to a sauce pan and cook over low heat until the tomatoes start to become soft and expel their juices; slightly reduce. Take off the stove and add verjus. Stir to deglaze the pan a bit and then add the olive oil, swirl to emulsify, add salt and then pour over the vegetables. Stir with a spoon to coat the vegetables with the tomato dressing. Serves 4-6.

This recipe is from Terra Sonoma. While just verjus and sparkling water make a great spritzer, this one is ready for party. I encourage you to experiment. Serves 1.

Pour ingredients together into a chilled glass. Stir and serve. Garnish with a fresh sprig of mint.

This sauce from Jo Bradley, of The Victorian Farmhouse, in Little River, California, can be made ahead, refrigerated and reheated.

Sauté butter and onions until lightly brown. Add capers and crab then set aside.

Whisk together cornstarch and 2/3 cup verjus and cook on low heat until thickened and clear. Combine crab mixture and sauce, stir in brown sugar. Add a little of the remaining verjus to thin the sauce. Add pine nuts.

Add more verjus when reheating to get the right consistency. Pour over baked Brie and serve with sweet baguette slices.