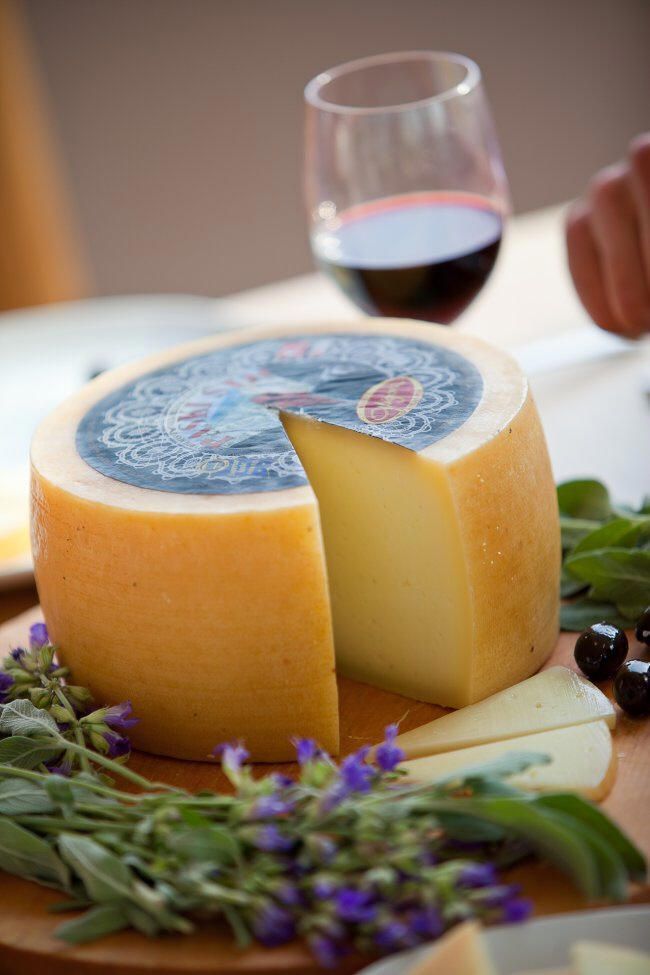 Croatian Paški sir, Bulgarian Kashkaval and Spanish Manchego are just a few of the many wonderful sheep milk cheeses to be explored and enjoyed.

Here’s my prediction. Once you taste a sheep’s milk cheese you will start to seek them out. That’s what happened to me.

Twenty years ago, I immediately fell in love with sheep’s milk cheese while traveling in Bulgaria. A friend’s invitation to an informal dinner was my introduction to this cheese whose subtle color belies its wonderful taste. The table was set with homemade pickles, olives, fresh bread, wine and Kashkaval (кашкавал), a Bulgarian sheep milk cheese. I was so smitten, I searched for sources back in the States, and I was able to find Kashkaval in one Middle Eastern store in the Washington, DC area. Fast forward twenty years and Kashkaval is can be found in upscale stores like Whole Foods.

Up until now, the most famous and the iconic sheep milk cheese has been Manchego, named for the Spanish state of Castile-La Mancha from where it reigns. This is the land of tilting windmills made famous by Miguel de Cervantes novel Don Quixote. La Mancha’s windswept, battered plateau is a perfect for raising Manchega sheep. My first taste of Manchego was in a DC tapas bar. It wasn’t quite the same as Kashkaval, but factoring in for difference of terroir, it was definitely in the same recognizable genetic cheese family. Manchego used to be a bit hard to find, but nowadays it’s always available at Costco, Whole Foods and even some mainstream grocery stores. Manchego is characterized and recognized by the herringbone design pressed into it’s brown rind.

Another sheep milk cheese is Israeli sheep’s milk feta. I have a sneaking suspicion that this cheese can be traced back to Bulgaria. Why you ask? That’s because during WWII the king of Bulgaria was able to broker a deal to let 50,000 Sephardic Bulgarian Jews relocate to Israel instead of going to Hitler’s gas chambers. Bulgarians are amazing gardeners and farmers, so would have taken their food traditions with them which would have been modified and transformed by the environment. I really need a grant to go to Israel to check out my thesis someday. You can find a creamy and tart Israeli sheep’s milk feta at Trader Joe’s.

Paški Sir from the Island of Pag 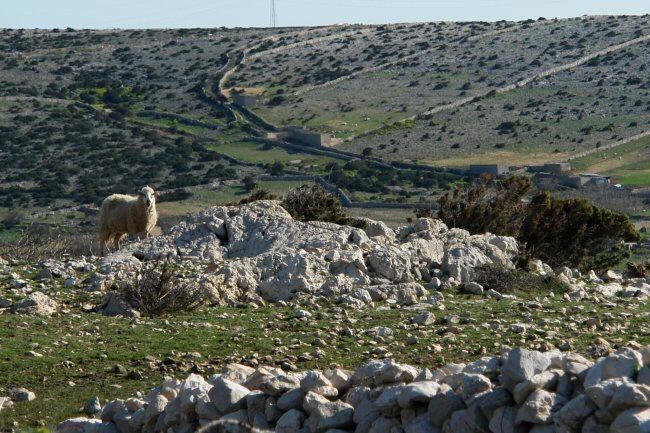 The island of Pag’s deserted moonscape of sage-covered limestone hillsides is perfect for grazing sheep.

But let me introduce you to my favorite sheep’s milk cheese from Croatia’s island of Pag. I was fortunate enough to first taste Paški sir in situ while traveling around the Croatia’s Adriatic islands.

As the ferry approached shore, the landscape looked almost uninhabitable. But upon transferring to land, what had looked like a deserted moonscape, turned into sage-covered limestone hillsides which is perfect for grazing sheep. I was to learn that the unique qualities of Paški sir come from the fact that Pag’s sheep graze on this salt-dusted sage, which is created when tiny sea droplets land and dry on its leaves. I was able to visit a cheese factory on the island and get a behind the scenes tour of its affinage (climate-controlled rooms and racks for aging cheese). At the end of the tour, I was given a souvenir round of cheese to take home. I will also never forget a memorable meal in a konoba, or Croatian cellar pub, that included homemade prosciutto, Paški sir, and friendly conversation all washed down with wonderful Croatian wine and a glass of herb-infused grappa. Now that’s what I call living.

In the past couple of years, the major cheese producers on the island have banded together to petition the EU to give

Protected Designation of Origin (PDO) to Paški sir, citing the island’s terroir, it’s climate, soil, location, and natural vegetation (i.e., the sage), plus animal husbandry and generational cheese production traditions and methods as key factors in support of seeking PDO status. I think this is brilliant move. This would give Paški sir the same protected status as world-renowned unique cheeses such as French Camembert or Brie de Meaux and Italy’s Parmigiano-Reggiano. To receive PDO status, an entire product must be traditionally and ENTIRELY manufactured (prepared, processed AND produced) within a specific region and thus acquire unique properties. This is definitely the case with Paški sir. I am very happy to announce that Paški sir will soon be available in the United States. To get the latest news on availability, become a Facebook or Twitter fan for Paški sir (see links below). You might even win your very own round of cheese.

I will close with a pondering about Ireland. A couple of years ago my family extended our usual Irish wanderings (my hubby is from Ireland) into hilly and sheep-friendly Connemara. Since my travels had attuned me to the environments perfect for sheep’s milk cheese, I started asking about where I could buy a local Irish sheep’s milk cheese—to no avail. There was none. From my perspective, this is a gigantic missed opportunity and lacunae in the Irish food offering. The Irish would do well to follow in the footsteps of the Croatians. 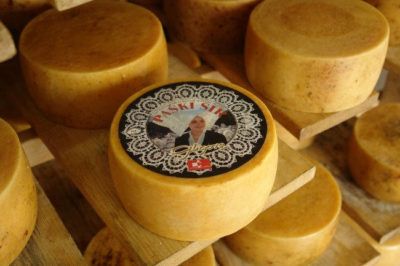 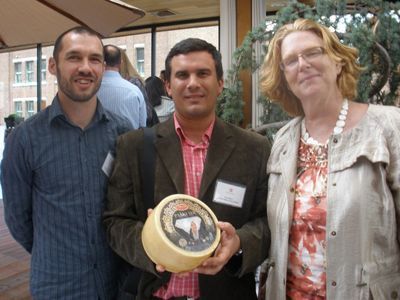 Me with Simon Kerr (left) PR for Gligora Dairy) and Ivan Gligora (center) at the First-Ever Grand Portofolio Tasting of Croatian Wines in NYC on June 16, 2011. The wines were just as fantastic as this cheese that is now available in the United States.