Get out the ice cream maker and make some summer memories–just like Jefferson did.

Thomas Jefferson first encountered ice cream in France and he brought back a special French ice cream maker to Monticello called a sorbétière. In order to enjoy ice cream in the summer, ice was harvested from the Rivanna River in the winter and stored in Monticello’s ice house. The ice was used throughout the year to preserve meat and butter, but also to chill wine and make ice cream. (Jefferson lamented not being able to get real vanilla beans for his dessert.)

This recipe is based on one Jefferson wrote in his own hand after “discovering” ice cream while an ambassador in France and is considered the first American ice cream recipe. Jefferson’s original recipe called for all cream, but I recommend substituting one cup of milk for cream, as I have indicated below.

Off the stove, add the egg yolks and maple sugar to a small or medium-sized bowl. Hand whisk until the egg yolks are incorporated into the sugar. Set aside.

Add the cream, milk and vanilla bean to a heavy saucepan and place over medium heat. Slowly heat the milk/cream mixture until small bubbles begin to appear around the edge of the pan. Remove from the heat. Cool enough to remove the vanilla beans and open the pods to scrape the seeds into the mixture.

Whisking all the time, gradually (and slowly) pour the warm milk/cream mixture into the egg/sugar mixture. Return to the saucepan. Stirring constantly, reheat the mixture over low heat until the mixture coats a spoon. This is a custard, sometimes called an ice mix. Do not let the mixture boil or it will curdle. Remove from the heat and let cool. You can hurry the process, by placing the saucepan in a bowl of ice.

For the best results, age the custard (mix) in the refrigerate for 24 hours or overnight. This will improve the whipping qualities of the mix and the finished body and texture of the ice cream.

How to make ice cream 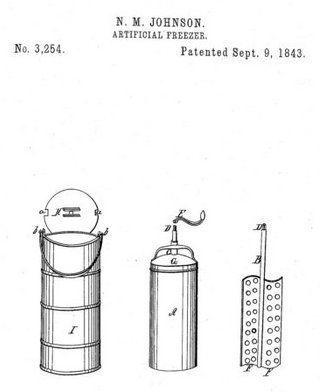 To create this frozen delight, you will need an ice cream maker. The one pictured to the right was patented by Nancy M. Johnson in 1843. This basic concept is still use today.

An inner metal cylinder that contains a rotating paddle, operated by hand or a motor, is placed in an outer bucket with room for crushed ice and rock salt to be added. The ice and water undergoes an endothermic reaction which creates a super cool surface on the inside of the metal cylinder helping to form a thin layer of ice cream. As this happens, the rotating paddle sweeps around and scrapes off the thin layer in order to let a new layer form.

A word of caution: Add the custard to the ice cream cylinder and start rotating the cylinder, either with a rotor or by hand, BEFORE adding crushed ice and rock salt to the external section of a ice cream machine. If you don’t start rotating the cylinder first, the mixture will start freezing on the inside of the container and soon the blade will not be able to move. For more details, follow the ice cream maker directions–remembering they were probably written by someone who has never made ice cream before.

*I always use the freshest cream and milk I can find. When I can get it, I use raw cream from cows on grass. If not raw, then try to find non-homogenized milk and cream that is just pasteurized, not ultra pasteurized.