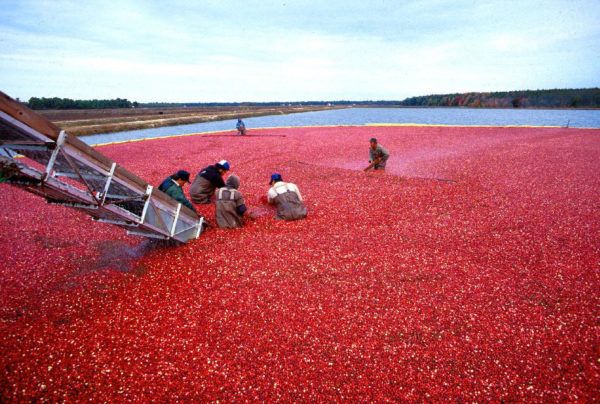 What’s more American than apple pie? How about cranberry pie? Now, before you accuse me of disloyalty, consider these facts. Apples are native to the Caucasus Mountain region of Russia, but cranberries are one of the most cultivated American species. Beloved by Native Americans and Pilgrims alike, the cranberry is a favorite holiday ingredient.

Perhaps a pie composed entirely of cranberries would pucker the lips, but how about a cranberry-apple pie sweetened with maple sugar? The point is, if you have restricted your cranberry consumption to canned cranberry sauce at Thanksgiving and Christmas, with an occasional loaf of homemade cranberry nut bread thrown in, you’ve been missing out on a cornucopia of cranberry tastes.

Novel uses for this red berry have been around for a long time. The North American Indians used cranberries in a hardy dish called pemmican. They combined dried deer meat, cranberries and melted fat to make a cake-like convenience food. Indian women also used cranberry juice to dye rugs and blankets. Because it was believed that the cranberry had medicinal properties, cranberry poultices were used to draw poison away from arrow wounds. As cranberries are naturally high in vitamin C, early American sailors carried barrels of them on board their ships to prevent scurvy.

Some sources state that the Indians presented the Pilgrims with gifts of cranberries and that they were on the first Thanksgiving table in 1621, but there is controversy about whether or not this is true. Some historians argue that the earliest Pilgrims could not have eaten the sour berries because they did not have sugar. But they could have used maple sugar, or dehydrated maple syrup, an article of food that was widely used by the Indians. (See section on Maple Sugar and Maple Syrup.)

It is generally agreed that the Pilgrims gave the berry the name we use today. The nodding pink flowers with their long pistils reminded them of the heads of cranes, so they called the plant the “craneberry”—which was later abbreviated. The name gained favor over “bearberry,” a name that referred to the fact that bears like to feed on them.

Early recipes are few and far between. Although the Wampanoag Indians on Martha’s Vineyard traditionally used cranberries to make a hearty cornbread, one of the first recorded recipes is from a book penned in 1672 by John Josselyn. He writes: “The Indians and English use them much, boyling them with sugar for Sauce to eat with meat; and it is a delicate Sauce, especially with Roasted Mutton. Some make tarts with them as with Gooseberries.” Other early recipes were included in a 1796 cookbook by Amelia Simmons entitled American Cookery. 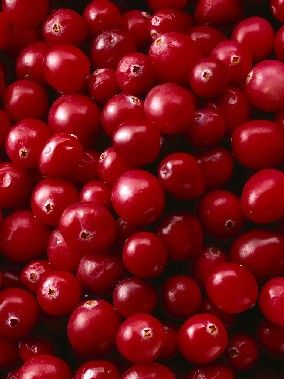 Initially, cranberries were gathered exclusively from the wild, but with some restrictions. Because the berries were so well loved by the Pilgrims—many Pilgrim wives had created their own recipes—anyone caught picking the berries before they were fully ripe was subject to a penalty.

By the early 1800s, the demand for cranberries had outgrown what nature could provide. In 1816, a Cape Cod sea captain named Henry Hall noticed that the naturally growing cranberries grew larger and juicer where the sand from dunes had blown over the runners the plants send out. His observations led to the vast cultivation of the cranberry that is now standard.

Natural cranberry “bogs” (cranberries do not actually grow in standing water) had been created by the retreat of the last North American glaciers about ten thousand years ago. In clay-lined depressions called kettle holes, water and decaying matter were transformed into peat, an acidic soil favored by the berry in the wild. In order to effectively grow cranberries in the vast numbers needed to make them economically attractive, early cultivators strove to mimic and improve on the natural conditions that supported their growth.

Although modern-day cranberry fields are still generally referred to as bogs, cranberries actually grow in highly prepared and well-drained fields that are near an abundant water supply. However, a rich peat soil is still a requirement.

To prepare an area for planting, a field is cleared and leveled. It is then covered with a layer of sand about three inches deep. Scientists now know that the sand helps stimulate the plants to grow new roots and more luxuriant shoots. It also provides good drainage and a relatively inhospitable environment for competing plants. After the soil has been prepared, cuttings from mature cranberry vines are placed into the soil deep enough to root in the peat. In three to five years, the new field can bear a crop large enough to harvest.

The primary method of harvesting cranberries takes advantage of the fact that cranberries float. In this method, called wet harvesting, the cranberry fields are flooded with water. After the flooding, eggbeater-like devices stir up the water with sufficient force to dislodge the berries from the vines. When the berries float to the surface, they are corralled to the shore with hinged two-by-fours and loaded in trucks for delivery to the factory. Wet-harvested cranberries are generally processed for juice and sauce because, once a berry gets wet, there is an increased chance of spoilage unless it is processed quickly.

Dry harvesting is the second method of harvesting cranberries. Because fully ripe berries are easily dislodged from their vines, this method employs a lawnmower-type machine that combs the berries from the vine.

Upon arrival at the factory, dry-harvested cranberries are subjected to a unique test. The superior berries are sorted from those that are bruised, soft, or rotten by taking advantage of the fact that they bounce—that is, they bounce when they’re good. Anyone who has cooked with cranberries knows they have a tendency to escape from the package and, when they do, bounce merrily around the kitchen.

Moving along a conveyor belt, each berry must successfully bounce over a series of wooden barriers. Those that fail this simple test fall into a disposal bin. The ones that pass the bounce test are sold as fresh fruit, typically packaged in plastic.

You can expect to start seeing fresh cranberries in the grocery store around mid-October. It is never too early to freeze some cranberries. I remember the holiday season of 1991 when I did not stock up on berries before Thanksgiving. Although the cranberry growers had one of the largest harvest of berries in recent history that year, most were not considered table quality and therefore were processed for juice and sauce. Many people had to go without cranberry dishes for Christmas because the grocery stores only received sufficient quantities of cranberries for Thanksgiving. Now I always call the Ocean Spray hotline (800-662-3263) to ask what the year’s harvest is like.

You can extend the time for enjoying cranberries up to nine months (and from my experience even longer) by freezing them. Freezing does not significantly alter their quality, as it can some fruits and vegetables. Also, you can conveniently use them in most recipes frozen. Just open the bag and pour them in—you don’t even have to chop them. Most of the time I just add them to recipes whole. This may change the texture of a dish, but not the overall flavor.

Unfortunately, many pesticides, fungicides and herbicides are sprayed on commercial cranberries (see The American Cranberry by Paul Eck, Rutgers University, 1990) but organic cranberries are now being grown in the Cape Cod region, and are available in some stores. 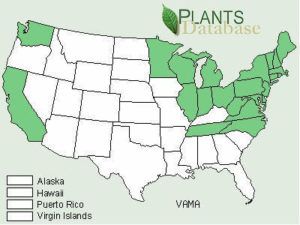 USDA map showing the native distribution of cranberries in the United States.

Though the early history of cranberry cultivation is entrenched in Massachusetts, it was not long before other areas starting growing the crimson berry. Cranberry cultivation in New Jersey, where the Lenni-Lenape Indians distributed the berry as a symbol of peace, is believed to have begun in 1840. Today with 3,500 acres under cultivation and a cranberry research institute associated with Rutgers University located there, New Jersey ranks third in the nation for cranberry production.

As settlers moved west, they discovered that cranberries grew wild in the marshes of Wisconsin. Many of the settlers were already familiar with the berry from Massachusetts and, therefore, quickly recognized its agricultural importance. Today Wisconsin produces 30 percent of the entire country’s cranberry crop.

Farther west yet, Washington and Oregon are good cranberry states. Wild cranberries grew in both states, but commercial cultivation of cranberries got off the ground when cranberry vines were imported into the area from Cape Cod.

Unknown to most consumers is that there are several different varieties of cranberries. Up until Thanksgiving, the primary cranberry on the shelves in East Coast supermarkets is called as Early Black. This cranberry is a darker or blacker red variety and more rounded than the cranberry sold from Thanksgiving to Christmas. The later cranberry is called a Howe. Howes are a little larger, keep better, and have an oval shape.

In the Midwest, you are most likely to find Wisconsin-grown larger sized Searles and Ben Lears. A Ben Lear cranberry is long and oval, while a Searle is olive-shaped. West Coast cranberries are predominantly McFarlins—but there are also Stevens and Bergmans. McFarlins are named after a one-time gold prospector named Charles McFarlin who planted the first cranberry bog in Oregon. McFarlins are smaller cranberries that have a wonderful aroma when crushed.