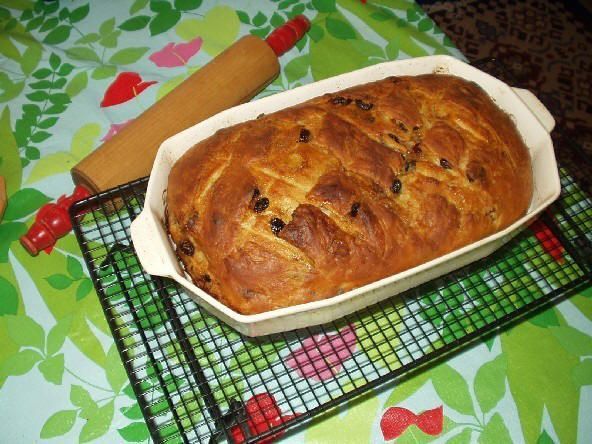 Wiltshire is a major English pig-producing area. Lardy cake is famous in the region and showcases lard in an unexpected way. Equal amounts of lard, raisins or mixed fruit, and sugar are folded between layers of dough, similar to puff pastry.

Don’t be squeamish about the amount of lard. It may seem like a lot, but when the cake comes together and is baked, the filling is partially absorbed into the dough, and what oozes out is filled with flavor.

You can use your favorite dough, but it must be elastic and pliable. I experimented with spelt, but it does not have enough gluten for this recipe. Traditionally, this cake is not made with cinnamon, but it reminded me of sticky buns, so I added some. Delicious!

Mix the flour, salt, sugar and yeast in a bowl and rub in the lard with clean hands or use a fork. Make a well in the middle of the flour and pour in the water, stirring to make pliable dough. Turn out onto a floured surface and knead until smooth and elastic, about 8-10 minutes. Place in an oiled bowl and cover with plastic wrap and then a towel, set in a warm place to rise for about 1 hour or until doubled in size.

Turn out onto a floured surface and roll out to a rectangle about 1/4 in thick, about 12×18 inches. Dot the surface with 1/3 of the lard, raisin and/or dried fruit and sugar mixture. Fold into three, bringing one end up and the other end down (or to the left and right) Seal the edge to trap the air and then give the dough a quarter turn. Repeat twice with the remaining lard, fruit and sugar. The goal is to create many layers.

Lightly butter a 9 x 13 inch baking dish, lightly shape the dough into an oval and place it in the pan. Cover with plastic wrap and a towel and leave to rise until doubled in size (about 30 minutes). Score the top of the dough in a crisscross pattern and in an oven preheated to 400°F for about 30 minutes or until well risen and golden brown.

Leave to cool in the baking pan for about 10 minutes, which will allow the cake to soak up some of the sugar/lard mixture that will have run out.Eat when cool, or if you can’t wait, slightly cool.