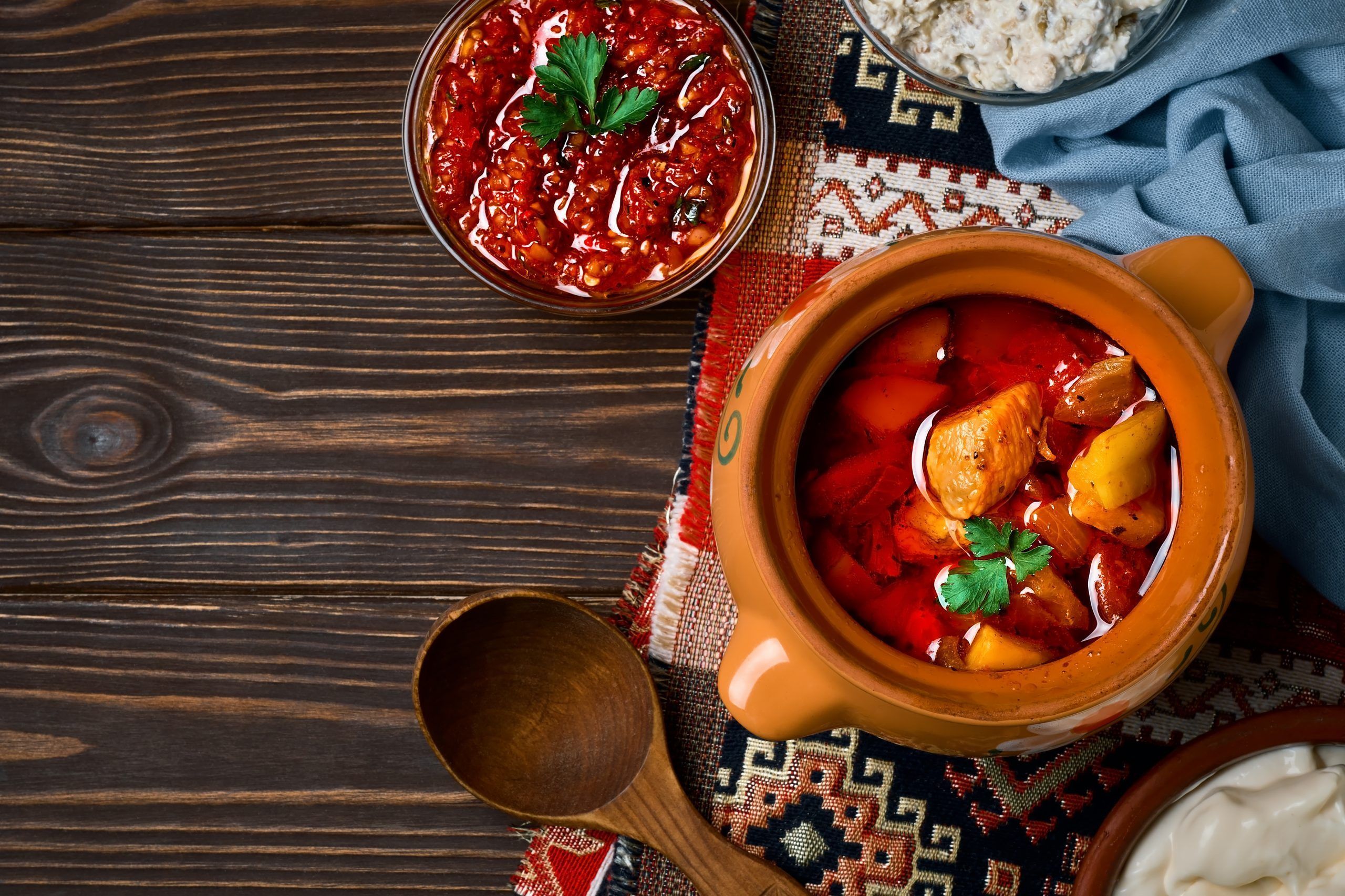 Baked meat in a clay pot, or a traditional pot dish, a stew with vegetables and meat cooked in the oven. Turkish and balkan or oriental food platter, flat lay with copy space

In this version, the veal should be from the breast or shoulder and include some fat. The ancients knew the value of bone and marrow to the diet, so always added them to the pot. Bones contain minerals in a form the body can easily absorb and the marrow is a great source of good fats. If you don’t like or can’t find veal, just substitute beef or pork. Gyuvech inherits its name from the large clay lidded bowls called gyuvech in which it is traditionally baked.

In a large skillet, brown veal cubes in butter. Remove meat from the skillet and set aside. In the remaining fat, fry onions until transparent. In a large bowl, put chopped eggplant, zucchini and green beans; set aside. Add okra to 2 quarts boiling salted water with vinegar and let stand off the heat for 15 minute (this serves to de-gum the okra), drain and add to the vegetable bowl. Add the potatoes, green pepper, and tomatoes. Add the browned veal, mint, parsley, salt and pepper; mix thoroughly and let stand for at least an hour.

Pour the onions and fat into the bottom of an earthenware gyuvech. Put in the veal marrow bone; add the veal-vegetable mixture, dot with butter and bake at 300ºF for 2-3 hours, or until the veal and vegetables are soft. If the gyuvech starts to dry out, you can add some hot water. When cooked, remove the marrow bone and let rest 20 minutes before serving. Serves 8.

This is a great dish for cleaning out your refrigerator. The final outcome will be slightly different depending on the combination of hard and soft vegetables used. In the hard vegetable category, green beans are a must; for soft vegetables, eggplant. Gyuvech inherits its name from the large clay lidded bowls called gyuvech in which it is traditionally baked.

Cut and chop all the vegetables in advance. The eggplant and zucchini should be cubed into bite-size pieces.

In a large skillet, place the hard vegetables: cabbage, green beans, onion, potatoes, and carrots. Sauté in their own juices until the vegetables soften and the cabbage becomes transparent. Transfer to a large lidded casserole dish or traditional Bulgarian clay gyuvech.

Add the peppers, eggplant, zucchini, and the other soft vegetables to the skillet with a little oil. Fry over a medium heat. As the oil is absorbed, add more little by little. When the eggplant starts changing color and reducing in size, transfer to the casserole dish or gyuvech. If using fresh tomatoes, add them at this time. Mix all the vegetables well.

Bake in an oven preheated to 375°F for about one hour, or until the potatoes are done. Add the canned tomatoes 10 minutes before the end. Serve with a side dish of fresh parsley. Serves 6. 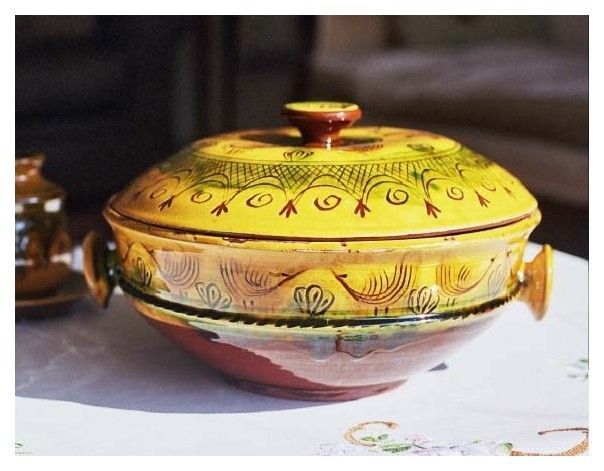 We must give praise and thanks to the peasants of the world for some of our best cuisine. I make this statement will great respect for it’s the peasants who brought us the French cassoulet, Turkish moussaka, and Spanish paella. To this rich panoply of culinary riches, we must add the Bulgarian gyuvech.

A gyuvech is a meal cooked in a ceramic pot of the same name, i.e., a gyuvech. Its variations are endless. I really think the dish was conceived by frugal and artful Bulgarian housewives as a way to clean out the refrigerator, while at same time putting a nourishing and appealing meal on the table. And if the mixture of available ingredients to put in the dish was a bit meager on any particular day, the beauty of the pot itself made up for that shortcoming. Throw in a bottle of wine and a loaf of bread and you are dining like a king.

In its most basic form, a gyuvech contains some kind of meat slow-roasted with a jumble of vegetables, that are seasoned with herbs and spices. Although I have enjoyed vegetarian versions, I prefer those with meat as they add a rich taste to the broth.

I hand-carried my first 5-quart gyuvech home from Bulgaria in 1990. It was heavy and I would not do it again. That’s why when I heard they were being imported, I decided to sell them on my site