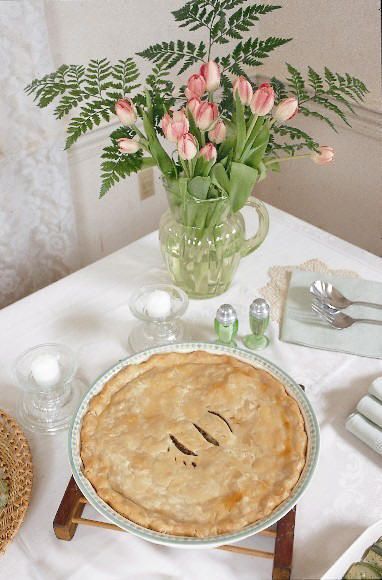 This Bulgarian Sephardic* recipe is from my cookbook Bulgarian Rhapsody. It will make a beautiful addition to your Easter or Passover table. The meat/eggplant filling is encased in an incredibly tasty crust. I bake mine in a 12-inch quiche pan by Villeroy & Boch, which unfortunately is no longer available—so any family-size baking dish will do.
Dough:

Sift the flour and salt, onto a flat surface and make a hole in the middle. Pour in the oil, butter and margarine. With your fingertips, mix the flour lightly with the poured in ingredients. Gradually add the sparkling water and the vinegar. Knead the dough and shape it in the form of a ball. Wrap in plastic or parchment paper and refrigerate while making the filling.

Roast, peel, and chop the eggplant in advance. Fry the onion with a little oil until it becomes slightly brown. Add the meat and cook until it changes color. Add the chopped eggplant, eggs, chopped parsley, salt, and pepper. Mix well and cool.

Roll out slightly more than half of the dough; transfer to the bottom of a well-oiled 12-inch baking dish. Pour in the stuffing and spread out evenly. Roll out the remaining dough and cover the stuffing with it. Roll the edges together to create a seal. Brush the upper crust with eggwash and use a fork to poke a few holes in the top. Bake in a 350°Foven until the pie acquires a golden color, approximately one hour. Serve hot.

*The bulk of Jews who settled in Bulgaria came from Spain in the fifteenth century. Seeking refuge from the Inquisition, thousands of Sephardic Jews migrated to the Balkans. The Spanish influence on Bulgarian Jewish food is evident. It is an intriguing blend of Spanish and Balkan cuisine, with some dishes even mixing the two languages and blending the traditional foods. All Bulgarian Jewish cookbooks are written in Ladino, the Jewish dialect of Spanish developed during the Jewish diaspora by Sephardic Jews who settled in the Balkans and some Middle Eastern countries.