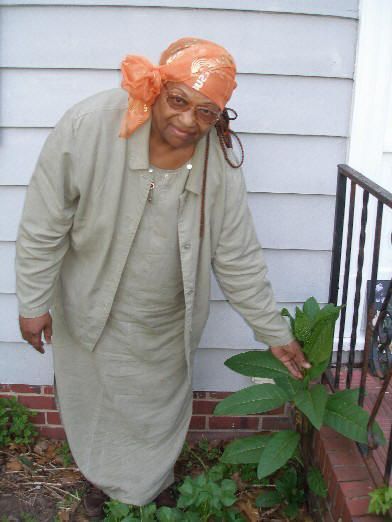 Alice Tanksley Brown grew up in Mississippi, a state rich in pokeweed. She remembers Dr. Pruett telling her mother, “Widow, if you give your children a mess of poke in the spring and some sassafras tea, you’ll save yourself doctor bills for a year.” The good doc was probably referring to pokeweed’s leaves purgative powers as they contain toxic alkaloids that should not be eaten in large amounts. Most recipes call for the green to be parboiled, at least once and sometimes twice, and for the water to be discarded.

Recently, Alice stopped by my house in Maryland to pick some pokeweed from my natural “garden.” It’s really just an unattended spot in my yard that attracts native species. In addition to pokeweed, there is oxalis, blackberries, mullein and purslane—all plants I consider great contributions rather than weeds.

A few days later, Alice returned to cooked up a mess of greens and give me some tips about pokeweed husbandry. She recommends breaking the tops off young pokeweeds in order to keep them from going to seed. This will force it to put on new leaves so you can eat it all summer.

When pokeweed is just coming up, about as hand high off the ground, you can eat it like asparagus without having to skin the stem–remembering to parboil it. But when it’s knee high or higher, take the leaves off, skins the stem, and then chop it into small pieces before adding to the poke greens. This way the stems are not tough, making the dish all that more enjoyable.

Pokeweed is indigenous to the United States (see map left) and is naturally occurring in a large swath of it. If you live in one of the green states, I encourage you to find someone to help you safely identify it, and then add some to your cuisine. While the greens are safe to eat when properly prepared, in the fall, pokeweed issues forth purple berries that attract a lot of birds. I’ve been told old timers eat one berry in the fall as a cleanser and for arthritis pain, but I have not tried that. The root is the most powerful and toxic part of the plant sometimes used by herbalist.

Take the ribs out of the greens by greens by folding the leaves “like they are praying” and then pull the greens off the stem. Chop the greens into small pieces. Comfrey and other greens are optional. When all the greens are chopped, rinse thoroughly and then transfer to pot to parboil. Fill the pot half full of water, bring to a boil and boil for about 10-15 minutes until slightly tender. Discard this water. Add more water and parboil again or drain.

Chop the onions and sauté in bacon fat or lard until the juices have reduced. Add the drained pokeweed. As it is cooking down, add the salt, pepper, maple sugar*, and thyme. Break the eggs into the pan and scramble quickly. Serves 6-8 as a side dish.**

*Maple sugar or any sweetener takes the “pokey” taste out.

**Be sure to tell your diners that pokeweed is a mild purgative. Alice says,” Just because it tastes good, doesn’t mean you should eat too much.” One cup per person is about the right portion.